Toronto, July 15, 2021 – Nuinsco Resources Limited (“Nuinsco” or “the Company”) (CSE: NWI), is pleased to announce results for previously unsampled drill core from diamond drilling programs conducted at its 100%‐owned Prairie Lake project near Terrace Bay, Ontario. This additional sampling of hole NP0713 more than triples the length of the known intercept of niobium (Nb), tantalum (Ta), phosphate (P2O5), and rare earth elements (REE) including lanthanum (La), cerium (Ce), samarium (Sm), neodymium (Nd) and yttrium (Y), extending it by 72m for the hole.  The program continues with the sampling focussing on drill holes collared to intercept the Southwest (SW) Area to ultimately provide information to support the Company’s goal of establishing a mineral resource on the property.

“The ongoing infill sampling of drill core from the previous drilling programs moves Nuinsco a step closer to upgrading part of the current 515-630 million tonne Exploration Target (“ET” - refer to table below) on the Prairie Lake project to a mineral resource,” said Paul Jones, Nuinsco’s CEO. “This project is in a logistically excellent location, in a stable jurisdiction, is endowed with a diversity of sought-after elements and commodities including Critical Elements defined under the Canadian Minerals and Metals Plan (“CMMP”).  It represents a target of very substantial scope and is a very significant asset to Nuinsco.” 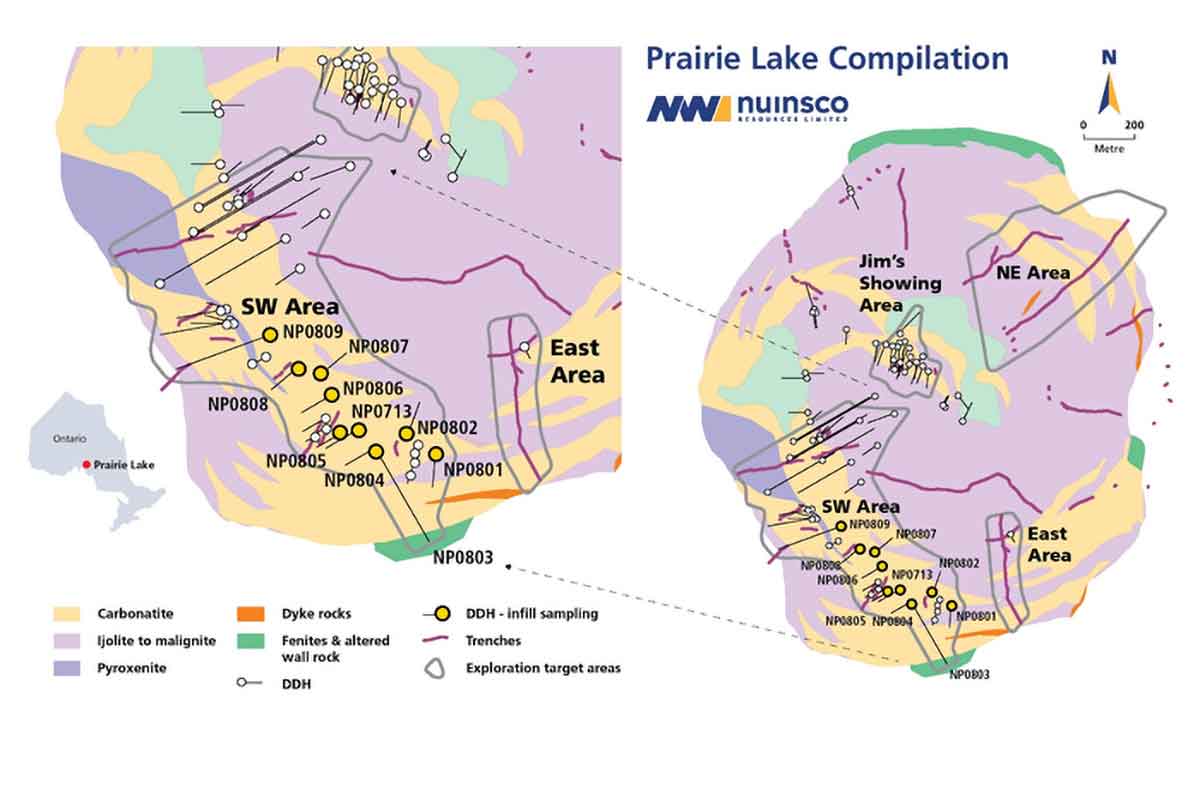 A total of 58 drill core samples were collected from NP0713, a 101m long diamond drill hole. A 72m section was sampled from 2m depth down to 74m. NP0713 is one of ten holes from the southeast half of the SW Area target from which samples have been submitted for analyses so far this year (see map). Additional sampling, primarily from the northwest half of the SW Area target, is planned for later this summer.

Previous diamond drilling on the Prairie Lake property (2007 to 2010) has returned assays up to:

The Prairie Lake project consists of 46 mineral claims covering an area of ~630 ha. Logistically Prairie Lake is superbly located, with ready access to power, road, rail and shipping infrastructure; it is easily accessed by an all-weather road from the TransCanada Highway 28 kilometres to the south. The mineralization identified is entirely contained within the Prairie Lake carbonatite complex; the ET of 515-630 million tonnes is defined by 59 diamond drill holes with grades as tabulated below.

All samples were analysed by Activation Laboratories (ActLabs) in Ancaster, Ontario. Samples were analysed for a whole rock and trace element ICP analytical package as well as for niobium, tantalum, and zirconium oxides using a fusion XRF method. An internal Quality Control Quality Assurance (QAQC) program was implemented with four QAQC samples (blanks and reference standards) added into the sampling stream. 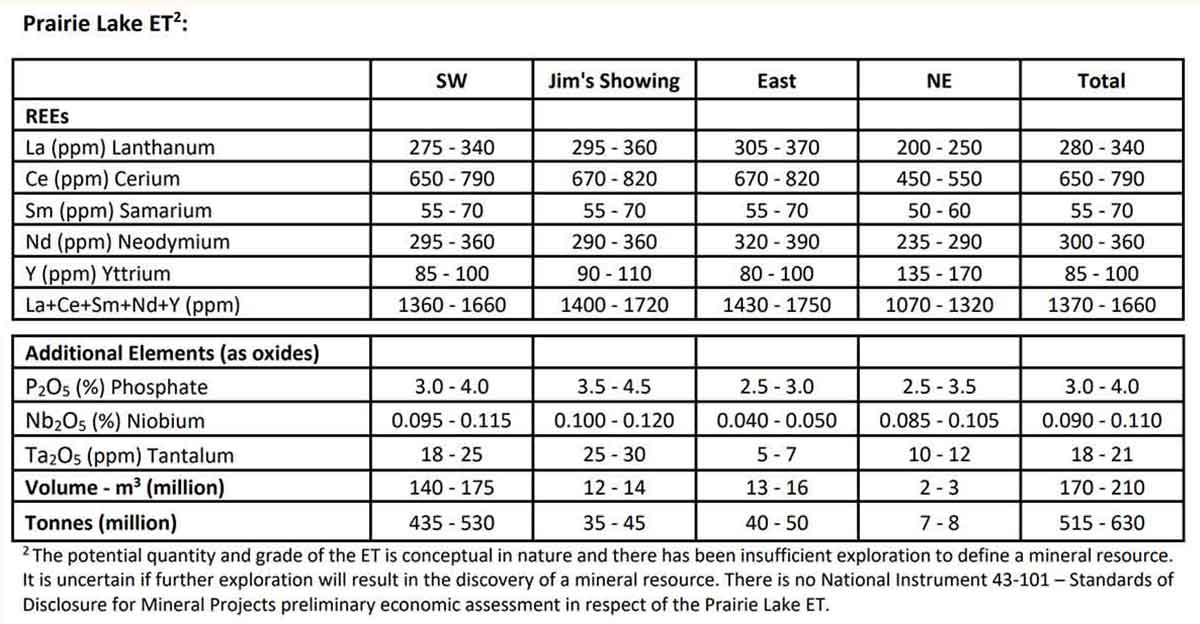 2 The potential quantity and grade of the ET is conceptual in nature and there has been insufficient exploration to define a mineral resource. It is uncertain if further exploration will result in the discovery of a mineral resource. There is no National Instrument 43-101 – Standards of Disclosure for Mineral Projects preliminary economic assessment in respect of the Prairie Lake ET.

All exploration work at Prairie Lake is supervised by Laura Giroux, P.Geo, Chief Geologist, who acts as Nuinsco's Qualified Person under National Instrument 43-101. Ms. Giroux has reviewed and approved the technical contents of this news release.

About Nuinsco Resources Limited
Nuinsco Resources has over 50 years of exploration suc­cess and is a growth oriented, multi-commodity mineral explora­tion and development company focused on prospective oppor­tunities in Canada and internationally. Currently the Company has three properties in Ontario – the high-grade Sunbeam gold prospect near Atikokan, the Dash Lake gold property near Fort Francis and the large, multi-commodity (rare-earths, niobi­um, tantalum, phosphorus) Prairie Lake project near Terrace Bay. In addition, Nuinsco has an agreement for gold exploitation at the El Sid project in the Eastern Desert of Egypt.