“The drill results align well with recent and historic surface sampling which produced anomalous gold analyses peaking at 83.5g/t gold from samples collected from underground waste rock from the Sunbeam Mine,” said Paul Jones, CEO. “This initial round of drilling not only generated high-grade gold assays comparable with historically reported grades and production from the Sunbeam Mine, but also confirmed the extensive presence of gold mineralization in the mineralized trends at Sunbeam, provided guidance for further drilling and other field work planned for later this year, and demonstrated that geophysical methods can be used to trace the host structures for gold mineralization on the Property.

The work program, that is currently continuing with geological mapping, prospecting, sampling, and geophysical interpretation is intended to expand the footprint of exploration coverage, particularly along the 30km of gold mineralized trends that traverse the Property.  We are also engaging in more detailed evaluation of aspects of the geology – particularly structural components given the evident importance of structure to localizing gold mineralization.”

Eight diamond drill holes totalling 1,091m were completed (see table below). Five of the drill holes (NS-21-02 to -06) were collared to test for strike and dip extensions to deformed rock known to host gold mineralization at the Sunbeam Mine and three drill holes (NS-21-01, -07, and -08) were collared to test combined IP-resistivity geophysical responses along the interpreted strike of the deformation that defines the Sunbeam-Roy lineament/trend. All drill holes other that NS-21-07 intersected zones of well-defined brittle-ductile deformation, fracturing, alteration, and sulphide mineralization over intervals of up to 30m, confirming the consistency and continuity of this known focus for local gold mineralization. Anomalous gold was intersected throughout the deformed zone attesting to the extensive mineralizing event that has affected the Sunbeam area.

Drill holes NS-21-01, -02, -03 and -05 produced the highest-grade intersections.  Drill hole NS-21-04, -06 and -08 intersected distinctly anomalous gold within the deformed rock of the Sunbeam-Roy Trend with NS-21-08 being collared 500m northeast of the Sunbeam Mine.  Drill hole NS-21-07 was collared on a geophysical response and intersected a sulphide mineralized quartz vein but no significant assays were returned.  The drilling focussed on the Sunbeam-Roy Trend near to the Sunbeam Mine but tested target areas separated along strike on the mineralized Sunbeam-Roy trend by approximately 500m to a maximum depth of 200m down-dip – approximately twice the depth of historic reports.

The Sunbeam Gold Property encompasses numerous sites of gold mineralization and includes the historic, underground Sunbeam Mine that operated between 1898 and 1905; the Pettigrew deposit, also the sight of considerable underground development; the Roy deposit; and a number of other gold showings. Gold mineralization at the Sunbeam Mine is hosted by a 30m wide zone of altered, fractured, and sheared-schistose rock and  occurs within a southwest striking quartz vein/chloritic zone that historically has been traced from surface to at least 100m vertically and along strike for more than 300m in pits and shafts. Similar mineralization has been observed on the Sunbeam lineament along strike from the Sunbeam Mine and on sub-parallel structures indicating an extensive mineralizing event has affected the Sunbeam rocks.  A 1903 plan of the mine shows an average grade of ~13g/t Au in the historic workings.  There was no exploration of the formerly patented mine site since the mine closed 116 years ago. Intermittent exploration on mineral claims around the patent was conducted between 1981 and 2012.

The Sunbeam Gold Property consists of 110 unpatented mining claims (218 cells), covering 48.8km2, situated 27km northeast of the town of Atikokan, Ontario, and 12km southeast of Agnico Eagle’s Hammond Reef gold deposit. It is easily accessible from Hwy 11 via well maintained logging roads. The property is traversed by at least three sub-parallel, northeast-trending, gold-mineralized trends secondary to the regionally extensive, sub-province bounding Quetico Fault. Collectively these trends now total approximately 30 kilometres of mineralized target domain on the Property and host 10 gold occurrences; it is an extensive exploration target that extends to all parts of the Property, has seen only intermittent historic exploration and represents an excellent opportunity to be comprehensively explored. Several occurrences have returned high-grade assays from grab-samples and limited drilling. Elsewhere historic pits and shafts have been excavated to conduct exploration at the Pettigrew, Roy, and Road occurrences – all of which contain gold mineralization that merits further exploration.  Previous work also identified new occurrences of strong anomalous gold mineralization from grab samples.

About Nuinsco Resources Limited
Nuinsco Resources has over 50 years of exploration suc­cess and is a growth-oriented, multi-commodity mineral explora­tion and development company focused on prospective oppor­tunities in Canada and internationally. Currently the Company has four properties in Ontario – the high-grade Sunbeam gold property near Atikokan, the Dash Lake gold property near Terrace Bay, the large multi-commodity (rare-earths, niobi­um, tantalum, phosphate) Prairie Lake project near Terrace Bay, and the Zig Zag Lake property (lithium, tantalum) near Armstrong. In addition, Nuinsco has an agreement for gold exploitation at the El Sid project in the Eastern Desert of Egypt.

Laura Giroux, M.Sc., P. Geo. is a qualified person as defined by NI 43-101 and has reviewed and approved the technical contents of this press release. 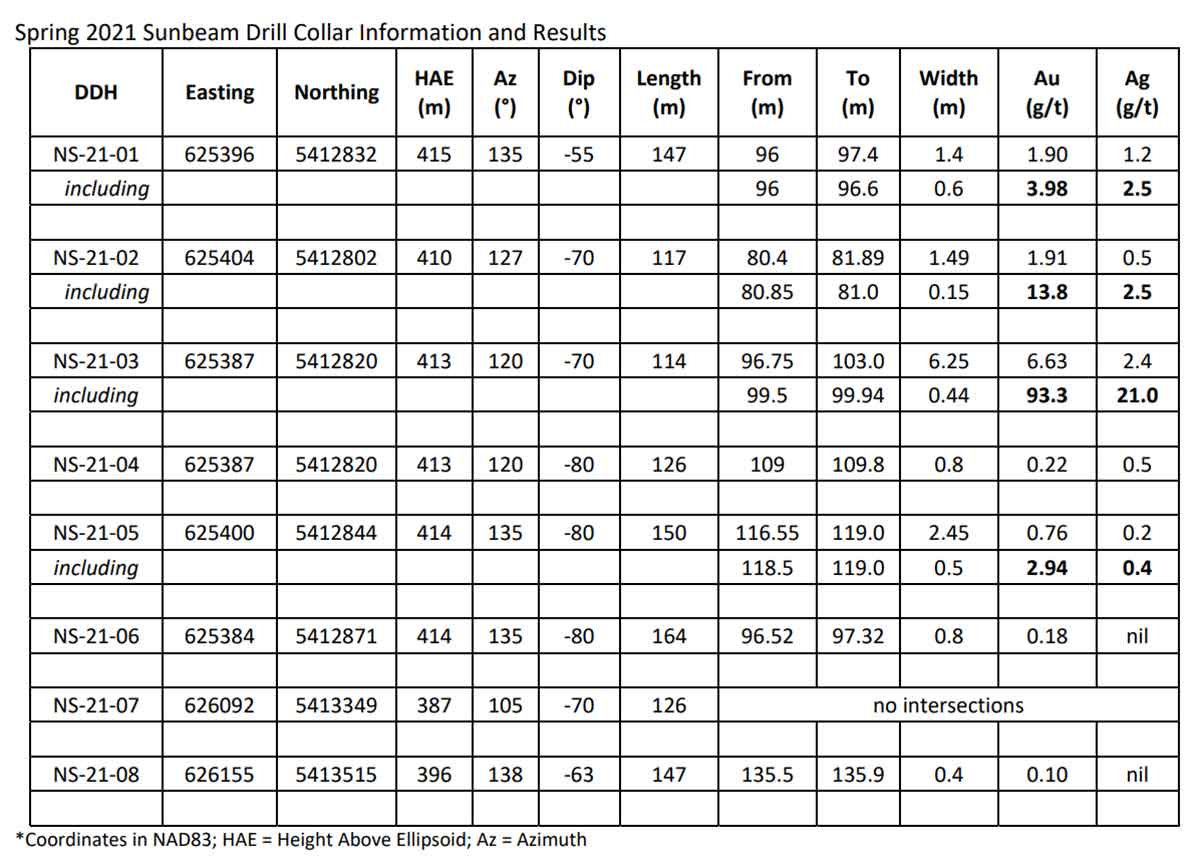