Toronto, January 22, 2021 – Nuinsco Resources Limited (“Nuinsco” or “the Company”) (CSE: NWI) today announced that a recently completed geophysical survey comprising induced polarization and magnetic methods, conducted on its Sunbeam Gold property (the “Sunbeam Project”) near Atikokan in northwestern Ontario, has added further anomalous target domains associated with known, high‐grade, gold mineralization for which diamond drilling is recommended. The survey expanded geophysical coverage to the east and west of the highgrade Sunbeam gold mine and now extends to three kilometres of continuous strike length along the Sunbeam lineament that hosts three of at least ten gold occurrences encompassed by the Sunbeam Project.

“The ongoing exploration at the Sunbeam Project continues to produce strong positive exploration results,” said Paul Jones, CEO. “The interpretation received from the current survey when added to our earlier geophysical coverage now identifies a number of chargeability/resistivity sources that define anomalous domains of more than 2,500m along the trend of the Sunbeam lineament. These anomalous domains are spatially associated along strike and down‐dip from known high‐grade gold mineralization at the Sunbeam Mine as well as significant gold mineralization at the Road Zone and possibly the AL198 Zone. Most of the remaining 25km of prospective, goldmineralized lineaments encompassed by the claim group, and hosting at least seven other gold occurrences, remain to be tested with geophysics. Given the known presence of high‐grade gold mineralization with disseminated sulphide in quartz veins in the Sunbeam mine‐workings the targets are very prospective and our intention is to determinedly explore the project.” 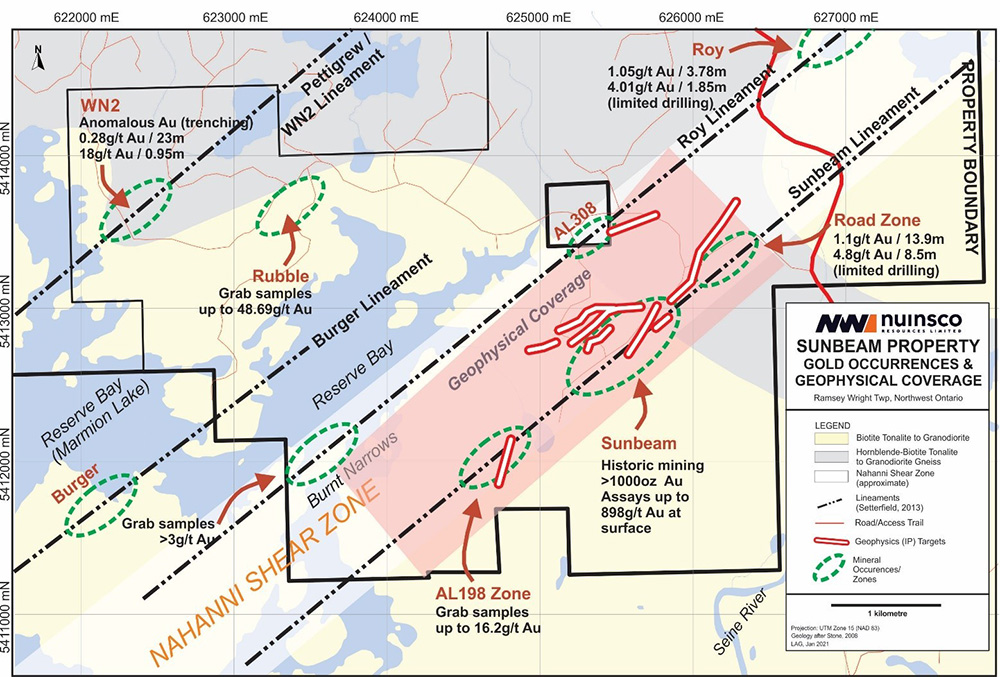 There has been no exploration of the formerly patented mine site since the mine closed 115 years ago. Intermittent exploration on mineral claims around the patent area was conducted between 1981 and 2012.

The Sunbeam Gold Project consists of 110 unpatented mining claims (218 cells), covering 48.8km2, situated 27km northeast of the town of Atikokan, Ontario, and 12km southeast of Agnico Eagle’s Hammond Reef gold deposit: Measured and Indicated Mineral Resources of 208Mt at 0.67 g/t Au, 4.5 Moz contained gold, (as per Agnico Eagle website www.agnicoeagle.com). It is easily accessible via well maintained logging roads from Hwy 11. The property is traversed by at least three sub‐parallel, northeast‐trending, gold‐mineralized lineaments secondary to the regionally extensive, sub‐province bounding Quetico Fault. Collectively these lineaments now total approximately 30 kilometres of mineralized target domain and host 10 gold occurrences. These lineaments present an extensive exploration target that extends to all parts of the project, have seen only intermittent historic exploration and represent an excellent opportunity to be comprehensively explored. A number of the occurrences have returned high‐grade assays from grab‐samples and limited drilling. Elsewhere historic pits and shafts have been excavated to conduct exploration at the Roy, Pettigrew and Road occurrences – all of which contain gold mineralization that merits further exploration.  Previous work also identified new occurrences of strong anomalous gold mineralization from grab samples collected along the lineaments.

The Company contracted Simcoe Geoscience to conduct an Alpha IP wireless, time domain, distributed IP, resistivity and induced polarisation survey and a magnetic survey over approximately 15 line kilometres of grid at 150m line spacing.  The intent of the survey was to map the subsurface resitivity and chargeability responses along a linear domain of deformation and gold mineralization termed the Sunbeam Lineament on strike from the Sunbeam Mine workings. The survey was configured to be capable of detecting responses to approximately 200m depth below surface.

Nuinsco Resources has over 50 years of exploration success and is a growth oriented, multi‐commodity mineral exploration and development company focused on prospective opportunities in Canada and internationally. Currently the Company has two properties in Ontario – the high‐grade Sunbeam gold prospect near Atikokan and the large, multi‐commodity (rare‐earths, niobium, tantalum, phosphorus) Prairie Lake project near Terrace Bay. In addition, Nuinsco has an agreement for gold exploitation at the El Sid project in the Eastern Desert of Egypt.

Laura Giroux, M.Sc., P. Geo. is a qualified person as defined by NI 43‐101 and has reviewed and approved the technical contents of this press release regarding the Sunbeam Project.